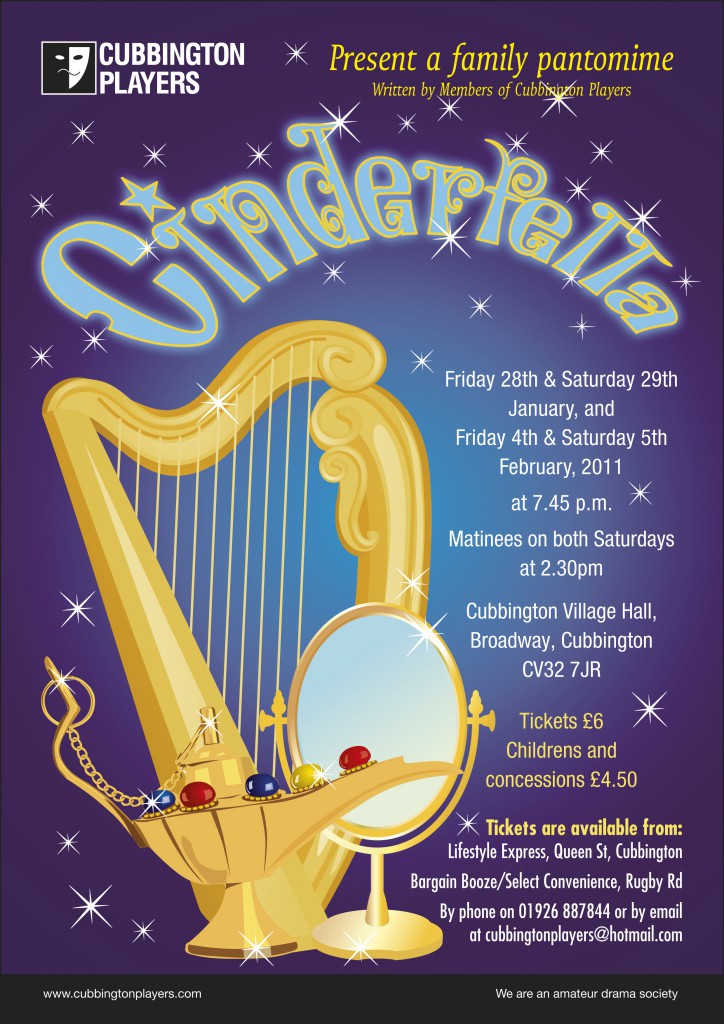 A Pantomime by Cubbington Players

When his mean and wicked uncle, Sir Festering Boyles, decides to awaken Princess Aurora from her 100 years sleep so that he may become king, Cinderfella realises that the only way to stop him is to find the three lost magic treasures, and wake the princess himself.

As Cinderfella journeys through Panto-land, meeting many weird and wonderful characters along the way, it’s a race against time to find the treasures, stop Sir Festering, and rescue Aurora!

Cubbington Players’ Cinderfella is a Hoot of a Panto

If you love panto, here’s a winnder because they are all here plus a few more for good measure.

The story so far – Princess Aurora (Cathy McKenzie), yes Sleeping Beauty, has slept for 100 years so wicked fairy Anasthesia (Steph Forster) is ensuring that the evil plan to kill her off succeeds.

Cinderfella (Steven Jarrad), in love with her, overhears his wicked uncle Sir Festering Boyles (Joseph Hughes) hatching a plot to save her – for himself.

To undo the spell they need a magic harp, mirror and lamp. Cinders is making stew but runs out of beans – enter Mary Popup (Dominique Talbot). Naturally she has magic beans. The gloriously chavvy Ugly Sisters Danni and Cheryl (Janet Denning and Teresa Coles McGee) throw them out of the window. They grow into a beanstalk up to fairy land where the three items are hiding.

The it’s a race between Uncle Fester and Cinders – and it wouldn’t be Panto if the goodie didn’t get the girl! But more twists and turns befall. The Panto Inspector (Paul West), in a tizzy with the crazy plot, is cursed by the Wicked Queen from Snow White to unknowingly metamorphose into a Pantomime Dame. My ‘man’ of the match – Mary Popup for sheer professionalism.

Great plot, glorious songs, beautiful backdrops, some quick thinking improv work, the usual mix of sweets and songs, more villains than you can shake a wand at – all in all – a hoot! Well done Daddy Bear, the West family and the Cubbington Players for a great piece of theatre.